Free Shipping to Canada & USA for orders over $150

One day, three talented skiers got together to discuss a few things that they had been thinking about, based on their own experiences. Firstly, why was no one making clothes that they wanted to wear? Clothes that combined excellent functionality with simple, cool design; not flashy, but still not boring. Secondly, was there any way that they could stay longer and more often in the ski resort they all loved – the little mountain village of Åre in the heart of the Swedish mountains?

The three skiers made up an unusually good group of people to find the answers. Stefan Engström was a world-class mogul skier with several World Cup wins to his credit. Peter Blom was editor-in-chief of the country’s biggest ski magazine. Christer Mårtensson was an art director and designer. Before long, they were joined by a fourth person, former alpine skier and ski salesman Jonas Ottosson.

It turned out that the answer to both questions was Peak Performance. The team’s ambitions didn’t initially extend much beyond making some clothes for themselves and their friends, in sufficient quantities to make a living from it. But the outside world wanted more. In the late 1980s, people were tired of extravagance and superficiality. Everybody missed the real thing that comes with genuine quality. A plaid flannel shirt was suddenly the answer, rather than neon and glitter. Grunge replaced synthesizers in the music industry and Peak Performance replaced a number of flashy brands on the ski slopes.

The people of Åre are of course proud of the brand that has built a global reputation. But locals are still just as skeptical of anyone that tries to brag or show off. You prove your worth on the slopes, on the rapids, on your bike, at work, or maybe by your ability to tell a good story around the fire at dusk. And if you can do it in style, you get an extra approving nod.

Turn the time machine back to 1986. Platoon and The Color of Money were premiering at the movies. “We are the world” was winning all the Grammy awards and Jan Hammer was writing the theme song to Miami Vice. Diego Maradona led Argentina to the World Cup, Boris Becker beat Ivan Lendl in the Wimbledon final and Ingemar Stenmark scored his 82nd World Cup win.

At the same time, a little Swedish winter sports resort experienced a boom that felt like a supernova. 1986 was the year it all happened in Åre. Everybody was there and we mean everybody. Some probably didn’t know exactly why, but they were there all the same. They took the hill to the bar and to the discotheque. Others started on a whole other journey. This was the winter of 1986 when Peak Performance was formed by a gang of indomitable ski enthusiasts just back from Sun Valley, Idaho.

Anyone who has visited Åre knows there are more challenges than simply conquering the slopes. Åre is an incredible spot but the weather is truly unpredictable. It demands patience, stubbornness and a real passion for skiing to withstand the cold, the darkness and, at times, the lack of snow.

From the very start, our business was shaped by what we ourselves found important. Finding the right design and technical solution was paramount. And this strategy worked, as it continues to today, above all expectations. Orders generated by our first mail order catalog overwhelmed the little post office in town. So much so that they had to take on more personnel just to keep up. During the early years, most things took longer to do than they should have. After all, Peak Performance was a company founded by skiers – people who more than anything else wanted to ski come winter. Man and nature in perfect harmony, as our saying goes. Some days the telephones weren’t manned and the mail wasn’t opened – our staff tossed design ideas around while riding the ski lift up to the top of Åre’s highest peak.

Anyone who managed to find our little office in Åre was often confronted with a sign on the front door that read: Gone skiing. Nights at our modest headquarters were spent designing new garments, working on new catalog sketches and packing orders. That was a great time. And it would become better.

Åre, in the Swedish province of Jämtland. Zip Code 830 13. There’s only one Åre. But then in fact there are so many places like it. Cortina, Chamonix, Vail, Aspen, Verbier, Zermatt and St Moritz.

All classic ski resorts with the same feeling of exclusivity and tradition as Åre. They all have something in common. That same fervent passion and sense of values shared by the world’s leading ski resorts. You might say it was our goal from the very beginning. To hang our sign outside a ski shop in one of these historic European and American venues as fast as we possibly could. It turned out not to be that easy. These were not the most progressive of places. Expansive and unique for sure. But they were and are also true to their long history. Shop locations and the like are often handed down from one generation to another. To suddenly make room for a gang of Scandinavians in smart new jackets was not part of their game plan exactly.

You might just say Peak stood alone on a dark piste full of obstacles. The perfect challenge. The kind we love to tackle. After some of the local bigwigs went skiing with our financial director things began to lighten up. They hadn’t realized that our number cruncher was a former Swedish freestyle champion. Or that our sales manager had competed in the moguls event in the Olympics. And that one of our founders had accumulated a number of World Cup distinctions. They were in for a big surprise. When the local stars accompanied these clothing salesmen up the mountain to teach them a thing or two, they all suddenly found out these guys were the genuine articles.

Ten years into its development, Peak Performance has become a large company. Well known, well established and much appreciated. And successful. Constantly renewing itself.

Ever seen fish swimming in a school? They swerve to the left and to the right. Up and down, never stopping. They cling together despite, or perhaps because of, their sheer numbers. Like a large energy force. Peak Performance had become like that. A movement, a uniform glow, a large force with strong individuals all moving toward the same objective without being too predictable.

When Peak Performance blew out the candles on its 10th anniversary cake, the company was stronger than ever. We continued to grow in number and the company’s objectives were fine-tuned. The leverage each employee exerted was enormous. The engine was revving high and the speed continued to increase. Merits kept piling up.

New stores, a stock market debut, Whitbread victory with the EF yacht, launch in Japan, shirts and sports jackets in tweed, three-ply Gore-Tex® jackets, new office, a rising stock price, sponsorship contracts, one trade fair after another, and more employees. The lights never went out at the Stockholm headquarter. There was always someone there attending to something that needed to be done. Or there were final arrangements to be made for an internal party.

The marketing department coined the phrase, The Great Outdoors. A characterization of a brand of skis that would come to include so much more. An outdoor experience, extreme sports, wilderness, training. A desire to be outdoors rather than indoors. That’s what Peak Performance is all about. In our design studio, the laboratory where our new super-technical products were developed, our over-worked design boss found time to set up a sign entitled: “The Great Indoors”. But he still managed to ski more than 60 days a year and surf 25. Wearing new Peak clothes of course. He was not alone.

Fredrik Jacobsson, Helen Alfredsson, Suzann Pettersen and more. Not a bad golf team, if we say so ourselves. Robban Olsson, Stina Jakobsson, Henrik Windstedt & Co: Peak’s Ski Team was made up of top skiers who attracted excitement and respect wherever they decided to compete.

Peak Performance had grown a lot and was still growing. In every possible way. It was a lot more than a patch on a jacket. It had always been so much more. For us it was, and still is today, a life culture. No matter whether it’s golf or free-riding at its best.

Peak Performance broke into the new century with 2,000 new ideas. Some of them were already being realized. We launched our new flagship store – the large Peak Performance store in the heart of downtown Stockholm. Not to mention our new stores in Düsseldorf and Dubai.

We widened our collection, discovered new functional materials for running and developed a new workout collection. We climbed onto mountain bikes in our new Peak clothes, secure in the knowledge that we hadn’t even come half way yet.

We were just getting started.

Love of sports. Love of nature. Our guiding principles are the same today as they were almost 30 years ago.

30 years with Peak Performance have rocketed by. And when we defy our own nature by looking back over our shoulder, we realize just how incredibly fast the time has gone by.

Yes, time goes fast when you’re having so much fun. But it still feels like yesterday when the initial idea came to us. That’s when we decided to rewrite the map on skiwear. Like it was only yesterday that we stood at our drawing table in Åre designing a dream that was about to come true.

From where we’re sitting, very little has really changed. OK, the structure has changed and a new professional business system has been introduced, new people are in place and technology has continued to develop. Peak Performance has gone from being a garage-size company to a market-leading brand.

But our foundation is the same. Our love of sports and of nature. There’s not a lot to change there. In fact, nothing at all.

Our eyes are set on the future.

Three decades since our start, we’ve found ourselves expanding into a number of activities. Golf, skiing, training, running and a casual line strongly connected to our ski resort roots. What could possibly be our next move?

As it turns out, we didn’t have to look for the answer. It was right here at Peak Perfomance. Our lives have become more fast-paced dependent on finding smart solutions. For us, being active was now more than sports, more than a hobby or a way to enjoy free time. It is how we get to work, how we travel and how we relax, by ourselves and among friends. As professionals, as skiers, golfers, runners, creatives and as adventurers — it is our everyday life.

We started rethinking how to serve every aspect of the modern life. By taking our know-how of functionality and quality and seamlessly fusing it with modern design. Clothing created for everyday use in the urban environment. Of course, we’ll never forget our roots on the slope and passionately continue to make the very best ski gear we can, always developed together with professional skiers.

In the end it’s all about freedom. Being able to make the most out of every opportunity, knowing that we’re always prepared for anything. From slopes to streets, from bike to bar, from work to workout — this is Peak Performance. 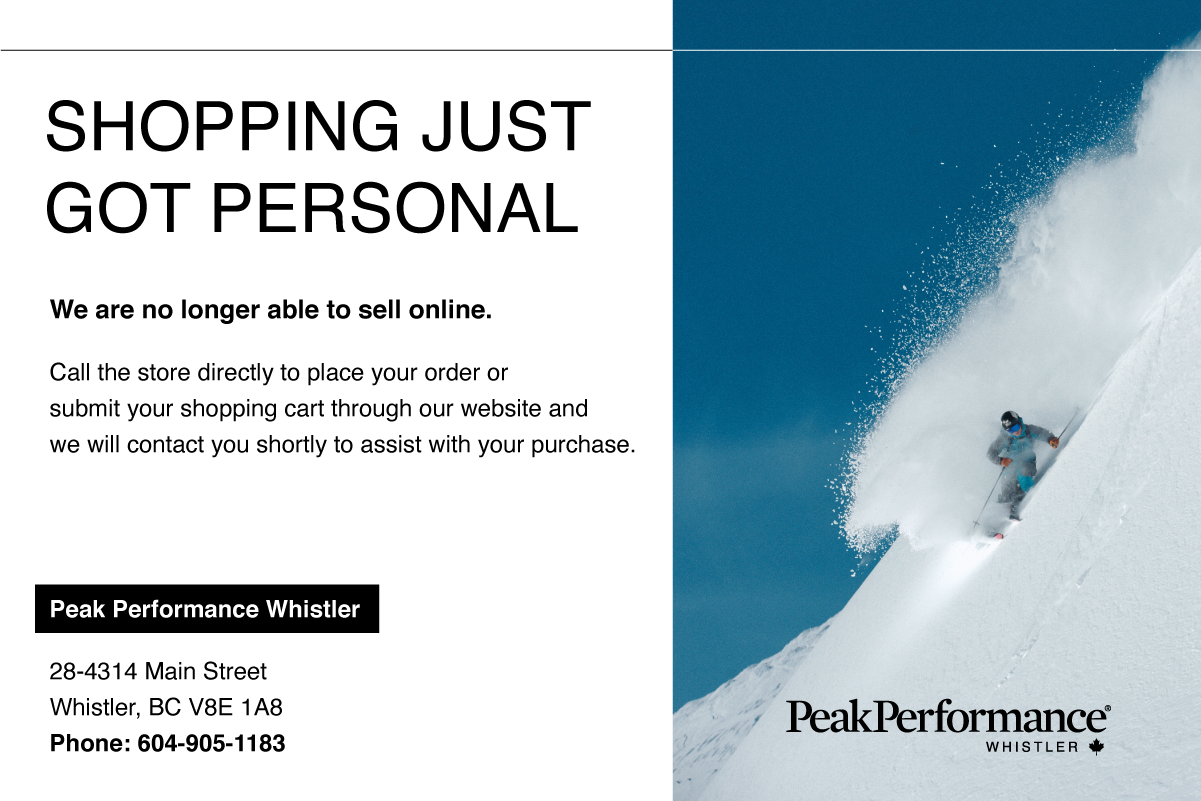